Spring Waterfalls and Wildflowers in the Columbia Gorge
April 14-16, 2017

The Columbia Gorge on a Cloudy DayIn the Spring, the Columbia Gorge has two main attractions: waterfalls in the west Gorge and wildflowers in the east Gorge. Our trip started out with a dark, rainy day for touring the waterfalls along the Historic Columbia River Highway (excellent one-page map). Starting at Troutdale, the old highway runs parallel to Interstate 84 as you head east from Portland. In addition to spectacular views of the gorge, it passes by more than half a dozen easily-accessible waterfalls. Given the plentiful rains this winter, all of the waterfalls and cascades have full flows of water.

Waterfalls in the Western Gorge

We picked up the historic highway at Corbett (exit 22 off I-84). In three miles, the highway passes by Crown Point Vista House with its fabulous views of the Gorge in both directions. Between Crown Point and Multnomah Falls, the highway passes by Latourell Fall, Shepperd’s Dell, Bridal Veil Falls, and Wahkeena Falls. All of these falls are easily accessible from parking areas. 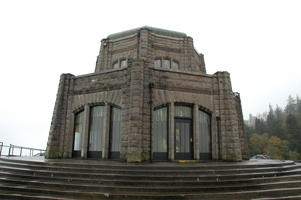 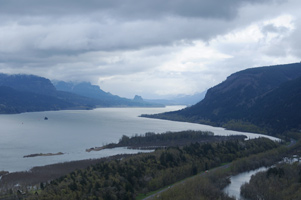 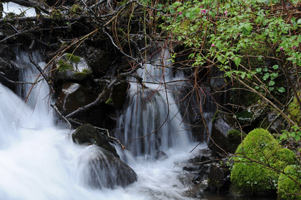 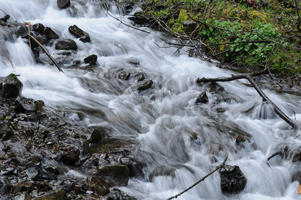 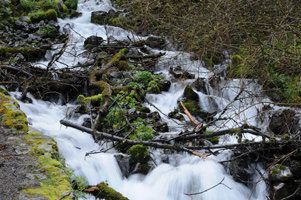 The bridge over Lower Multnomah Falls provides spectacular views both up and down! 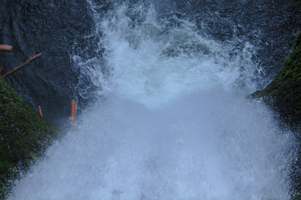 Above Lower Multnomah Falls, Looking Down 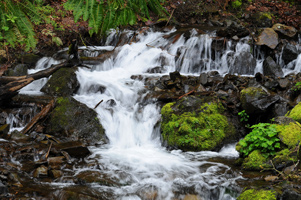 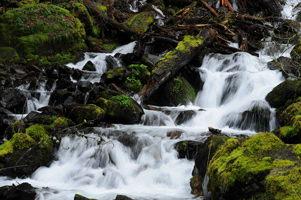 The crown jewel of waterfalls in Oregon is Multnomah Falls, and it deserves its fame. It’s actually two waterfalls: the upper is 542 feet tall, while the lower falls plunge another 69 feet. There’s another 9-foot drop between them, for a total height of 620 feet. A short walk on a paved trail leads to a footbridge directly above the lower falls, and you can climb upwards on the trail to reach the top of the falls.

After Multnomah, there are still several falls along the highway: Oneonta Falls (1-mile hike to the waterfall), Horsetail Falls, and Elowah Falls.

Wildflowers in the Eastern Gorge 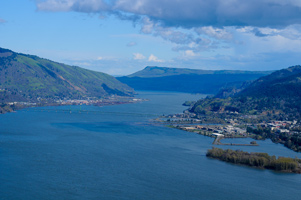 Columbia Gorge on a sunny day, overlooking Hood River and White SalmonAfter we emerged from the moss-covered trees of the western Gorge, we discovered that sunlight would be the rule for the weekend – our wildflower hunt was on! We stayed in Underwood, adjacent to White Salmon and Bingen and across the river from Hood River. All of these towns make a great base for exploring the area – they provide essential services, and you can easily cross the river here.

We focused our wildflower hunt on the Washington side of the river. With no rain in sight, we had a gloriously sunny and windy weekend for exploring, and we saw a nice variety of wildflowers.

Old Highway 8: the old highway winds along the hills above Highway 14 on the Washington side of the river between Bingen and Lyle. There are several hiking areas where you can see wildflowers along with spectacular views of the Gorge: the Catherine Creek Trail and the Klickitat-Balfour Day Use Area. Catherine Creek Trail is very popular, so come early if you want to park close to the trailhead. The Klickitat-Balfour Trail is paved and easy. It first winds around above the Columbia River, and then it heads up the Klickitat River for 3/4 mile. The trail ends at a beautiful overlook with 2 picnic tables. The Klickitat River is wide and slow here, and there were a lot of ducks and some geese on the river. We saw a wide variety of flowers here, and our dogs loved it as much as we did! 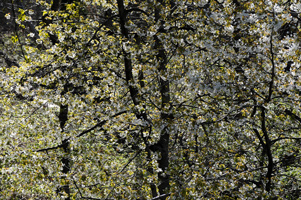 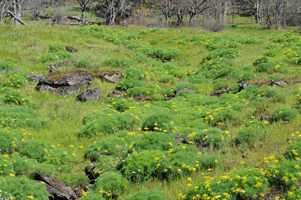 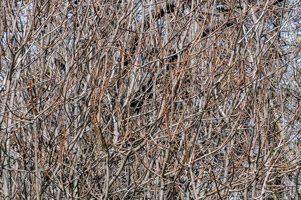 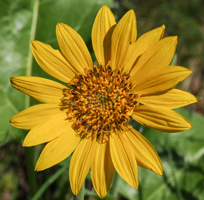 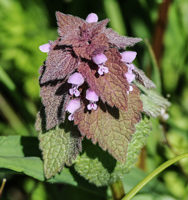 Humble Henbit (had to look that one up!) 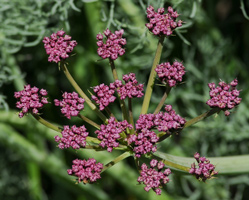 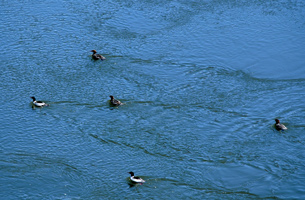 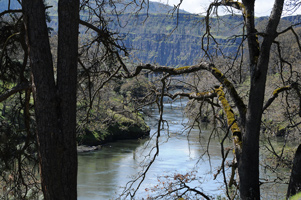 Looking down the Klickitat River to the Columbia River

Columbia Hills Historical State Park: we saw a lot of wildflowers along Dalles Mountain Road on the unpaved drive out to the historical ranch. 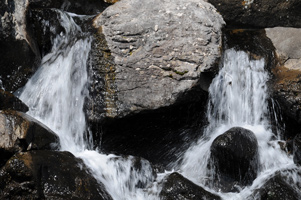 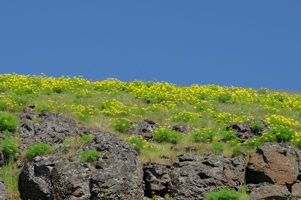 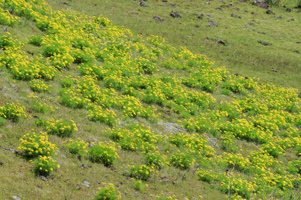 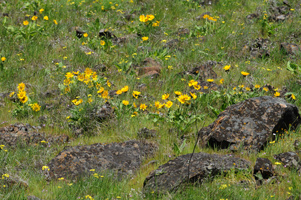 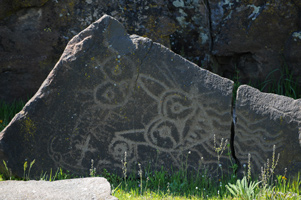 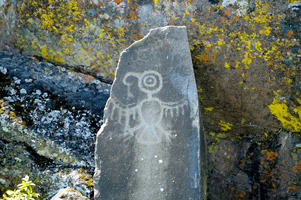 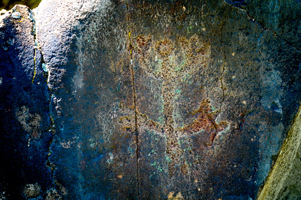 Maryhill Stonehenge: this full-scale replica of Stonehenge was built as a memorial to World War I soldiers from Klickitat County. It’s built from concrete instead of sarsen stones, and the monument depicts Stonehenge as it was when built. It’s an impressive sight, overlooking the Columbia Gorge with windmills on the hills above.

Inside the Maryhill Stonehenge Memorial 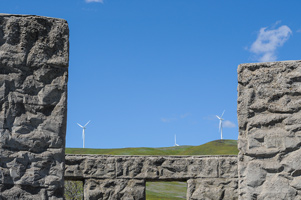 Windmills on the hillside behind the Maryhill Stonehenge Memorial

Inside the Maryhill Stonehenge Memorial

Hood River Fruit Loop: this loop starts and ends in the town of Hood River, and it circles through the orchards and farms to the south of the city. Easter weekend was a week or two early this year to catch blooming orchards. The trees had growth buds and some early leaves, but no flowers. Views of Mount Hood were spectacular, of course, and the baked goods were as good as ever at Apple Valley Country Store and Bakery in Hood River. It’s a beautiful drive through orchards and wineries and farms, with Mount Hood dominating the view (when it’s not hidden in the clouds, anyway). You can see Mount Baker on the Washington side of the river, as well. 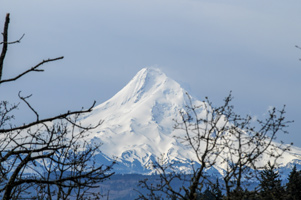 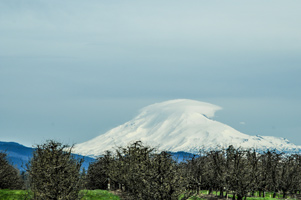 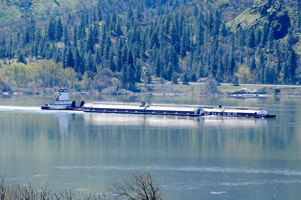 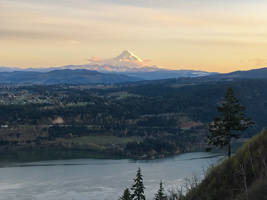 Mount Hood at sunset from the north side of the river

There’s a good selection of restaurants and places to stay in the White Salmon / Hood River area; these are from our recent experience.

About the Author: Dennis Freeze began actively exploring Oregon and Washington after moving here from the Mendocino Coast in Northern California. His guidebook, Mendocino Outdoors (now in its fifth edition), has outings and custom maps for the Mendocino Coast. You can also follow him on Twitter as @dffmonolith or at 500PX.com/dff.